A Style Guide For Korean Fashion 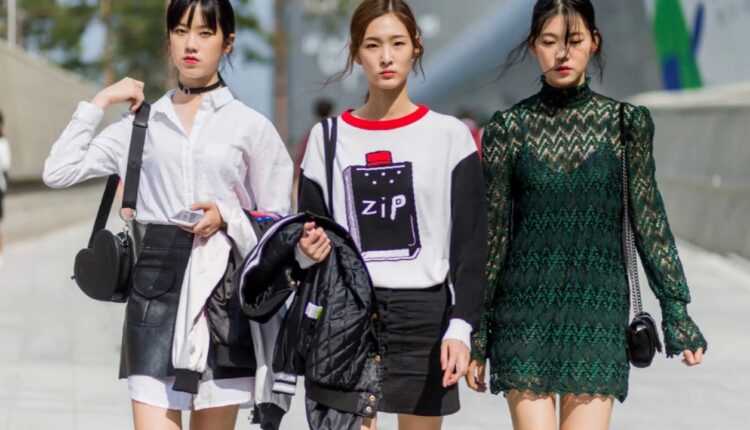 Korean culture is growing rapidly in the Western hemisphere of the globe. The Western world is going crazy about everything Korean (‘K’) at the moment. There’s K-Drama for people who love Asian Drama shows, K- Beauty for makeup enthusiasts, and perhaps most profoundly, K-Pop of which has a very strong fanbase.

Now K-Fashion is on the rise and a lot of people are redirecting their attention from the West to the East. Korean clothing brands are buzzing with diverse styles ranging from female floral cardigans to male cargo pants. Seoul is widely considered to be a constant source of fashion inspiration and it comes as little surprise that Seoul Fashion Week attracts designers from all across the world.

Here is a style guide for Korean fashion that can inspire your next look!

1. Wearing A Dress Over Your Blouse

This trend became widely popular in the summer of 2017 and does not look like coming to an end anytime soon. In Korean culture, leaving your chest area or shoulders exposed is regarded as inappropriate and most women do not wear revealing clothing regardless of whether the weather is hot or not thus preferring to go with this look.

School uniform has transited from being a normal school outfit to a contemporary every other day look. It simply involves wearing a simple long-sleeved top combined with an A-line skirt.

If there’s something that Korean clothing brands take very seriously is ripped denim. It is a simple and casual outfit that you can wear at any time of day. Since they are jeans anyway, there’s not much science behind how they are worn in Korea as long as they are worn in confidence.

Headwear is considered very fashionable in Korea. Headgear such as bucket hats, baseball caps, beanies, and berets are very popular in the country. It’s also worth mentioning that puffy headbands are really in fashion in Korea largely thanks to Red Velvet’s SeulGi who wore it in the video of their hit song ‘psycho’.

Converse sneakers are a favorite among Koreans. A simple scroll through the Instagram profiles of Korean fashion influencers will show you just how trendy they are. Converses go with just about any style of wear but an outfit to match the color detail on the shoes with a touch of jewelry should do just right.

Blazers happen to be a highly versatile piece of styling not just in Korea, but everywhere in the world. They can be worn in just about any setting be it casual or official. However, Koreans, in particular, have taken blazers a few notches higher with fashionistas wearing baggy and oversized blazers with bright colors.

Breathing New Seoul Into Your Outfits

K-Fashion might come off as too bright for newcomers into the Korean fashion scene but exploring the styles offered by Korean clothing brands can prove to be good fun and very eye-opening. Why don’t you give it a try today? You’ll be amazed at what you might discover.

Summer Outfits Trends to Watch Out